In Peter Schjeldahl’s review of the Metropolitan Museum’s new Islamic wing (“Old and New”, The New Yorker, Nov. 7, 2011), he says, “To grasp Islamic aesthetics, Westerners must upend their sense of ornamentation as a minor art.”

The first image below is constructed from five polygons — two shapes at three scales. The symmetrical border encloses asymmetrical, crisscrossing paths of the polygons, aligned edge-to-edge, with gaps. The second image, based on the first, uses a patterning technique originally developed by Islamic artisans. The polygon set is not Islamic, but patterning through the interior decoration of polygons is. The main difference between these images and Islamic patterns, besides the actual polygon shapes, is the use of scaling polygons to introduce variation, especially in density of line. Scaling polygons and the Islamic patterning technique borrowed for the second image below make a geometrically precise patterning system.

These polygons, based on interior angles divisible by π/7, are more difficult to arrange edge-to-edge without gaps than a polygon set based on π/5. An asymmetrical pattern like this required gaps. Nevertheless, the pattern has merit given that seemingly random connections link opposite symmetrical borders. The polygons are all precisely edge-to-edge, with no adjustments necessary. Polygons in the center align through as many as fifty other tiles to both borders. As vectors, each polygon edge has one of three lengths and fourteen possible directions. 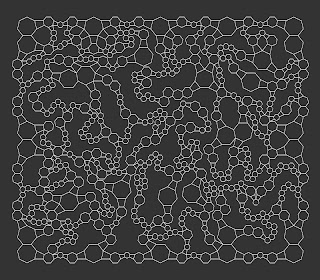 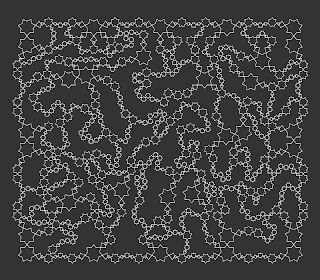